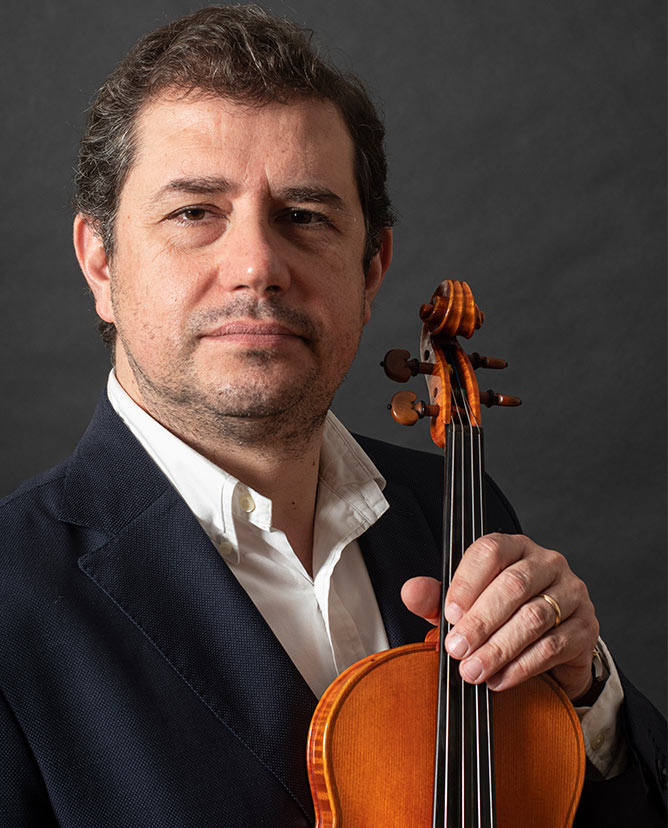 Born in Lisbon, Rui Fernandes received a scholarship from the Gulbenkian Foundation, the Luso-American Foundation for Development and the Northwestern University (USA), where he studied with Gerardo Ribeiro, having obtained a Master’s degree and a Performance Certificate.

Still in the United States, he studied Pedagogy, with a special focus on Suzuki methodology, with Betty Haag. He was a member of the Suzuki Association of the Americas and the American String Teachers Association. Between 1995 and 1997, he worked at the Talent Music Institute of Des Plaines as Assistant of Professor Gerardo Ribeiro at Northwestern University School of Music.

Rui Fernandes was awarded in the violin competitions of the Portuguese Musical Youth and in the Young Musician Award, intermediate and higher level. He also won the Audience Award “Major Blythe Award” at the Aberdeen International Youth Festival.

Rui Fernandes regularly collaborates with the Gulbenkian Orchestra, with which he has toured, and performs with numerous orchestras and at various music festivals across Europe, Asia, Africa and America. He has worked with Maestros such as Christoph Eschenbach, Daniel Barenboim, Franz Brüggen, Kent Nagano, Leonard Slatkin, Pierre Boulez, Pinchas Zukerman, Rudolph Barshai, Shlomo Mintz, Sir Georg Solti, Zubin Mehta, among others.

Rui Fernandes taught violin and violet at the Lisbon Academy of Music from 2004 to 2014. His students have been awarded on more than 50 occasions, having won the main national and international competitions held in Portugal.