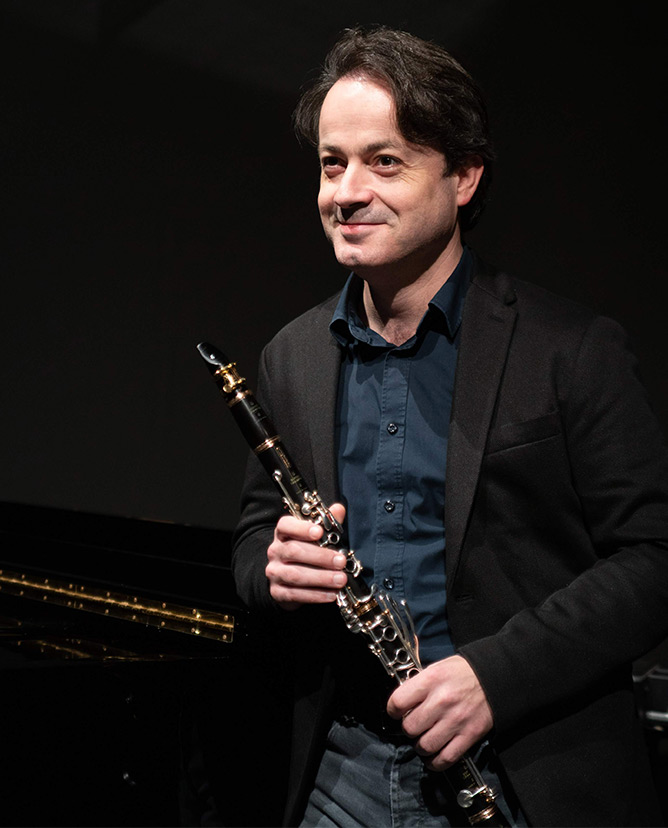 Artist of the Buffet Crampon and D’Addario Woodwinds brands, Nuno Pinto is described by the press as a “genius clarinettist” (Daniel Bailoni), “brilliant” (Nicholas Cox) and “on the level of the great international virtuosos of the instrument” (Bernardo Mariano ).

Nuno Pinto studied clarinet with Saul Silva, António Saiote, Michel Arrignon and Alain Damiens in Portugal and France and has dedicated a large part of his work to chamber music and contemporary music, being a founding member of the chamber groups Camerata Senza Misura, Trivm de Palhetas e Clarinetes Ad Libitum, having also played with some of the best musicians today.

Nuno was a member of OrchestrUtopica and of the Música Nova Group and has been a member of the Sond’Ar-te Electric Ensemble since its foundation.

As a soloist or part of chamber groups and ensembles, Nuno Pinto has done a remarkable job in the dissemination of contemporary music, having received dedications of several works by Portuguese composers with whom he regularly works.

During his intense career, he premiered more than 160 works, by Portuguese and foreign composers, having recorded 140 works, more than 50 live, in 25 record editions. His album “Tempo de Autumn” (Artway Records 2016), recorded with the pianist Elsa Silva, brings together works by Portuguese composers for clarinet and piano. Highlighted by national and international critics, it was the record of the year by Jornal Público: “A record that stands out for the quality of the interpretation of these two experienced performers, and it is also worth mentioning the fact that it is the first phonographic edition of the six pieces that comprise it. ” (in Ípsilon / Público, Pedro M. Santos, Top 10 Records – The best of 2016).

Nuno Pinto is one of the most outstanding Portuguese soloists with great international relevance, having been a soloist with several orchestras and participating in International Music Festivals in Europe, America and Asia.

Nuno Pinto is a professor of Clarinet and Chamber Music at the Superior School of Music and Performing Arts – Polytechnic of Porto.