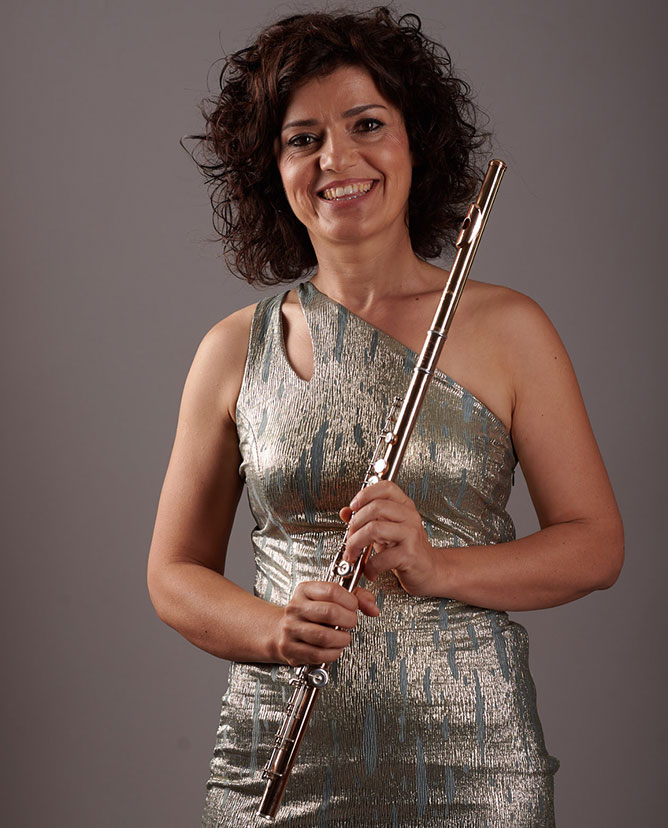 Ana Maria Ribeiro is the solo flute of the Porto Casa da Música Symphonic Orchestra and the Orquestra Filarmónica Portuguesa (Portuguese Philharmonic Orchestra) and professor at the Calouste Gulbenkian Music Conservatory of Aveiro.

Ana Maria completed her studies at the Musik-Akademie Der Stadt Basel in Switzerland, in the class of Professor Félix Renggli.

She was born in Santa Maria da Feira, having attended the Academy of Music there and later the Escola Superior de Música do Porto with a scholarship from the Calouste Gulbenkian Foundation.

Ana Maria regularly performs solo with orchestras and other ensembles in Portugal and abroad.

She has conducted numerous master classes across the country and abroad and has been invited to guide the suit of flute in internships in various orchestras.

Some pieces integrated into the flute repertoire were dedicated to her. Among them, there is the concert for flute, marimba and winds, by the Spanish composer, Teodoro Aparicio Barberan, that she performed in a world premiere at the “Palau de la Musica” – in Valencia.

Her performance in festivals is highlighted, namely: Festival Internacional Luso-Brasileiro, in Porto; Seville Convention – AFE; XII International Festival of Flautists  – ABRAF, in Belém, Brazil; Hands on Flute – Aveiro, in which she was part of the organization and the XXXI International Music Festival of Pará, in Brazil.

Ana Maria is often a member of juries in national and international competitions. Her participation as a member of the Jury at the III Concours Maxence Larrieux , in Nice, where she guided master classes and participated in the gala concert, should be highlighted.

She has collaborated with the Orchester National de France and the Ensemble Les Dissonances.

She recorded her first solo CD with pianist Isolda Crespi Rubio, “The delirium of my desire” for the label, Artway Records.